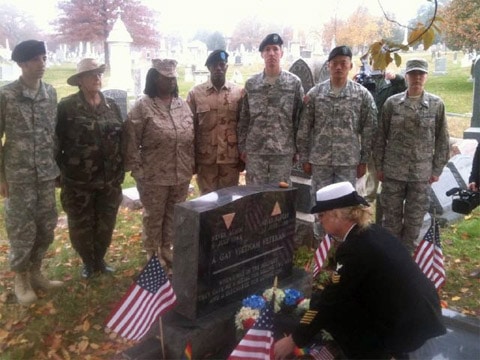 As the start of a week of actions meant to draw attention to the urgent need for legislative repeal of 'Don't Ask, Don't Tell', activist group GetEQUAL and a group of gay vets this morning held a sunrise vigil at the grave of Leonard Matlovich.

Matlovich, a Vietnam war vet and gay rights pioneer who took up residence in San Francisco's Castro District in the late 70's, appeared on the cover of TIME magazine in September 1975 under the headline "I am a Homosexual"

According to the BAR: "[Matlovich] had told his commanding officers he was a homosexual but wanted to remain in the service. The Air Force kicked him out, and Matlovich sued the secretary of the Air Force. Matlovich settled out of court and received $160,000. The lawsuit did prompt the military after 1981 to switch from giving gay service members dishonorable discharges to honorable discharges."

Matlovich's headstone, in the Congressional Cemetery in Washington, DC, is well-known. It reads: "When I was in the military, they gave me a medal for killing two men and a discharge for loving one."

I don't expect this is the last we'll see of them this week.

The Hill warns today that abandoning DADT repeal would be "political disaster for Obama.":

But abandoning the effort to repeal the “Don’t ask, don’t tell” policy would be a political disaster for President Obama, who made a campaign promise to end the ban.

And with a Republican majority in the House and diminished Democratic numbers in the Senate in the incoming Congress, the lame-duck session may be the last chance to repeal “don’t ask” before the 2012 presidential campaign begins in earnest.

If Reid isn’t able to move the repeal through the Senate, Obama will have to explain to his liberal base why he failed to follow through on a central promise from his 2008 campaign.

And Politico adds that McCain's calls on Meet the Press for hearings have further dimmed the measure's chances for repeal:

If McCain can hold off Senate floor action on the defense authorization bill which contains conditional repeal language not only until December 1 but until after hearings on the Pentagon report, that may well kill repeal for this year. If the Senate waits until after hearings to move on "don't ask," it would then need time to bring the defense bill to the floor, debate and vote on what could be a lengthy list of amendments, end debate, pass the bill, conference it with the House, and re-pass it in the Senate. Even if the Senate began work on the bill this week, that would be a tall order and if the body takes no action until, say, the second week in December, it becomes hard to see how passage could be accomplished in the face of continued resistance by McCain and others.

"McCain… is stonewalling, trying to run out the clock on repeal by calling for congressional hearings,"  Joe Solmonese of the Human Rights Campaign complained in a statement Sunday reacting to McCain's comments. 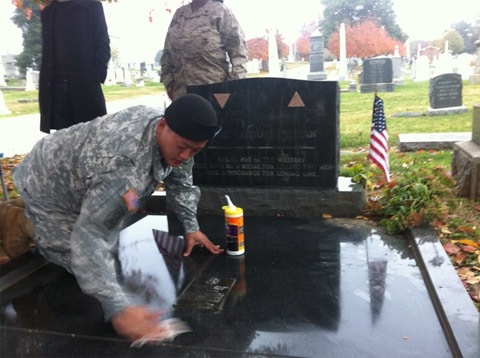