Shawn Woodward was sentenced today to six years in prison for an "unprovoked attack, driven by virulent homophobia," according to the judge, for an assault on 62-year-old Ritch Dowrey which left Dowrey with permanent brain damage. 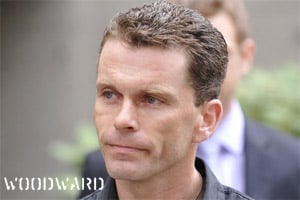 "Woodward, 37, punched Dowrey in the face in the Fountain Head Pub, a gay bar in Vancouver's West End, March 13, 2009, causing Dowrey to fall unconscious on to a tile floor. Woodward was charged with aggravated assault. Vancouver Provincial Court Judge Jocelyn Palmer rejected Woodward's evidence that Dowrey had touched his crotch before the assault. She said the evidence showed that Dowrey — who was celebrating his retirement that night — had twice approached Woodward and asked if he could buy him a beer and had merely touched his shoulder. However, Woodward responded: 'I'm not like that,' meaning 'I'm not gay,'" said the judge. As he was leaving the pub, Woodward sucker punched Dowrey and then stepped over him to get to the door, Palmer said. 'Mr. Dowrey had no opportunity to defend himself,' the judge said. Patrons held Woodward outside the pub and he told them Dowrey was 'a faggot' who deserved what he got."

According to friends, Dowrey now has no memory and is living in a care facility because he can't care for himself.

Said Dowrey's friend Lindsay Wincherauk: "Ritch on March 13, 2009, was this really super happy, fun-loving, good guy who encouraged everyone. Since the event, Mr. Dowrey has no recollection of today, yesterday, years before. He's happy to see you but he's not the same person … it's like he died that day."