Could the vote in November to oust three Iowa Supreme Court justices be thrown out on a technicality? 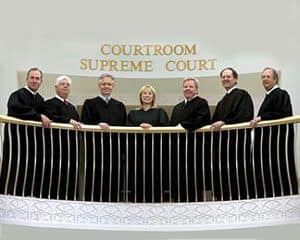 Three Des Moines-area attorneys believe the retention vote that ousted three Iowa Supreme Court justices was illegal because the Iowa Constitution mandates the votes for judges be "on a separate ballot."

They have filed suit to keep the three justices, who participated in last year's unanimous ruling that legalized same-sex marriage, from being tossed off the bench.

The ballot used Nov. 2 included the names of the justices standing for retention on the back of a single sheet, "combined with other elections, nonpartisan offices, Constitutional questions and public measures," the lawsuit says.

Thomas W. George, John P. Roehrick and Carlton Salmons are asking for a temporary judicial order that would bar the justices from leaving the Supreme Court when their terms end Dec. 31.

The attorney general's office will represent Secretary of State Michael Mauro, who is named in the lawsuit.

"The lawsuit asks that the three justices serve until the next general election or until a special election using lawful separate ballots."