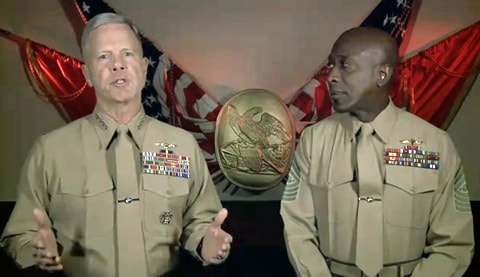 You may recall that last year Marine Commandant James Amos expressed strong opposition to repealing "Don't Ask, Don't Tell", even suggesting that Marines could lose limbs in combat if they were forced to serve next to gays.

Amos has fallen into line.

In a new video with Sergeant Major of the Marine Corps Carlton Kent, Amos urges troops to implement the repeal faithfully while maintaining dignity and respect.

"Above all else we are loyal to the Constitution, our Commander in Chief, Congress, our chain of command and the American people….I want to be clear to all Marines. We will step out smartly to faithfully implement this new law. It’s important that we value the diversity, background, culture and skills of all Marines bring to the service of our nation. As we implement repeal, I want leaders at all leaders to re-emphasize the important of maintaining dignity and respect for one another throughout our force."