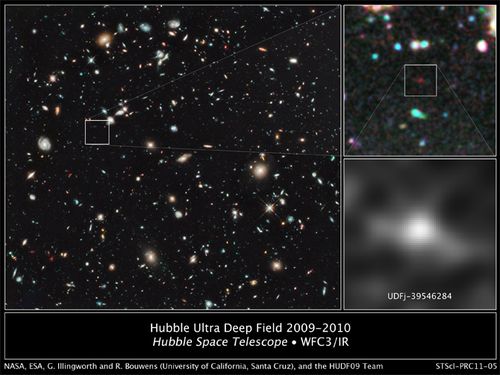 The Hubble telescope has spotted something very, very far away:

A zoom into the object, AFTER THE JUMP…

NASA: "This video is a zoom into the Hubble Space Telescope infrared Ultra Deep Field, first taken in 2009. It is a very small patch of sky in the southern constellation Fornax. The zoom centers on the farthest identified object in the field. The object, possibly a galaxy, looks red because its light has been stretched by the expansion of the universe. "

Previous Post: « Watch: Sarah Palin Trashes Obama’s State of the Union Speech
Next Post: Army Wants $2500 Payback from Dan Choi Because He Was Discharged, for Being Gay »