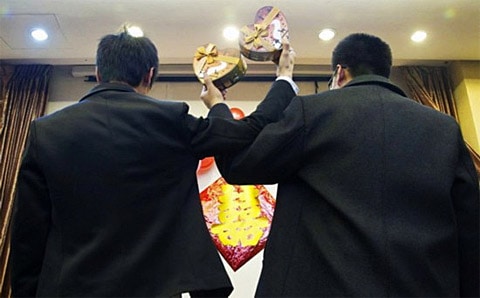 Two men held a gay wedding in Beijing over the weekend:

Da Wen and Xiao Qiang (not their real names) held a 'comparatively open' wedding ceremony with about fifty friends in attendance after meeting three years ago in an internet gay community.

'We just want to live a stable life as normal couples do, no matter if the wedding is held or not,' said Xiao Qiang. 'The society is more open than before, which makes us brave enough to show the public' Da Wen added.

The couple displayed marriage certificates similar to ones issued by the Ministry of Civil Affairs, but they are not believed to be real as gay marriage is not legally recognised in China.

The Straits Times reports that it's the first public wedding of its kind to be held in Beijing:

The wedding was held with the presence of an emcee, Xiao Dong, who works at the Beijing Rainbow Volunteer Station on HIV/Aids prevention. 'Their marriage is a remarkable move in the gay community because a settled-down relationship helps reduce the chances of Aids infection,' said Xiao.