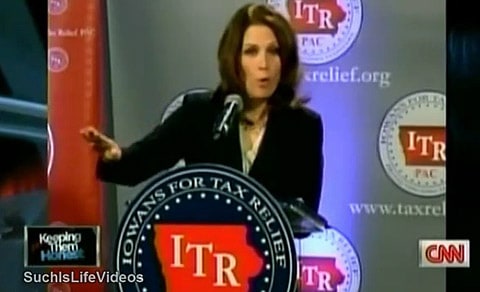 Said Bachmann to an Iowans for Tax Relief gathering over the weekend:

"How unique in all of the world, that one nation that was the resting point from people groups all across the world…It didn't matter the color of their skin, it didn't matter their language, it didn't matter their economic status. Once you got here, we were all the same. Isn't that remarkable?…We … know that the very founders that wrote those documents worked tirelessly until slavery was no more in the United States…I think it is high time that we recognize the contribution of our forbearers who worked tirelessly — men like John Quincy Adams, who would not rest until slavery was extinguished in the country."

Anderson Cooper corrects the GOP congresswoman from Minnesota, who will be delivering a rebuttal for the Tea Party after tonight's State of the Union address. We'll be posting the SOTU live here at 9 pm.