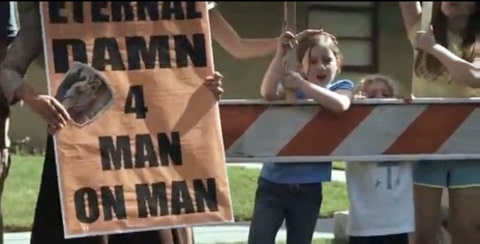 Director Kevin Smith's horror film Red State, which centers around a church not unlike Fred Phelps' Westboro Baptist Church, screened at Sundance last night. In addition to a well-publicized battle of protests outside, the screening, Smith made news by buying the rights to his own film, attacking Hollywood, and announcing his retirement.

The film site First Showing heaped praise upon it:

Yes, I'm calling Red State the return of the truly independent filmmaker that Smith was when his career launched after the success of Clerks in 1994. But there's no "snootchie bootchies," dick and fart jokes, or a Ben Affleck cameo. Kevin Smith has crafted what he calls a horror film, but what I found to be an engaging thriller with suspense, dark comedy, and quite possibly the best writing in the filmmaker's entire career. 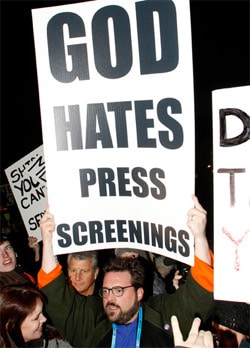 The WBC was, of course, on hand for the screening, according to The Hollywood Reporter:

The protests started early, at about 3 p.m., three hours before Red State would have its world premiere. On one side: foot soldiers from Westboro Baptist Church, declaring for the umpteenth time that “GOD HATES FAGS.” On the other? A ragtag collection of moviegoers — many Park City-area high school students — singing Katy Perry’s “I Kissed a Girl” at full volume.

Smith and his producers, never ones to miss a cheeky publicity opportunity, had encouraged supporters to protest any protestors who showed up on Phelps’ behalf. Early on, the Phelps crew was significantly outnumbered – only three were huddled in the snow. Meanwhile, the Smith side numbered in the scores, hoisting homemade signs that blared messages such as “Everybody Poops” and “I was told James Franco would be here!” They also sang “The Star Spangled Banner.” In all, about 250 people were there.

Smith bought the rights to his own film for $20,

Kevin Smith plans to release his new horror movie Red State himself, the writer-director declared at the film's first public screening at the Eccles Theatre on Sunday night. Smith had suggested for weeks that he would hold an auction post-screening for rights to his film, but ultimately announced that he would take the movie on the road himself throughout 2011 ahead of a planned Oct. 19 release. He paid himself a token $20 for the privilege, and he hopes that the roadshow will make some of the movie's roughly $4 million budget back.

"What we need to prove is that anyone can release a movie," Smith said from the Eccles stage as part of a long and profanity-laced speech after the movie ended during which he championed Harvey Weinstein as an inspiration and mentor. "Indie film isn't dead, it just grew up. It is just indie film 2.0 now. In indie film 2.0, we don’t let them sell our movie, we sell our movie ourselves.”

Smith also announced that he'll retire from filmmaking following the completion of his next production.

Watch Smith's speech at the premiere in which he lambasts Hollywood studios and their unfair systems, and the film's teaser trailer, AFTER THE JUMP… 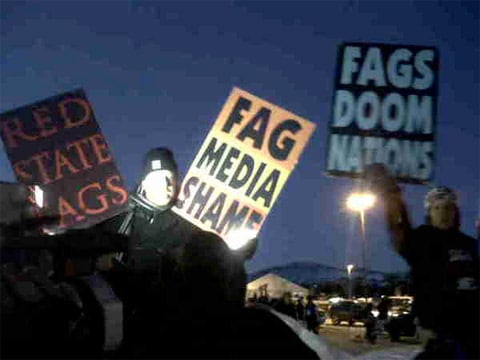 Previous Post: « Slushie-Hurling ‘Teens of Terror’ Attacking Gays in Toronto
Next Post: Do Civil Unions Have a Chance in Wyoming? »