Groups of teens from Jarvis Collegiate school appear to be using a new weapon, popularized by the TV show Glee, against gays in Toronto, the Toronto Star reports: 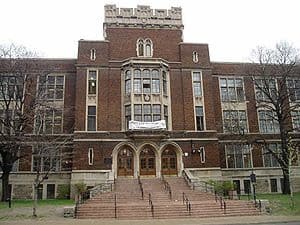 The principal of Jarvis Collegiate Institute said allegations that students are hurling slushies, shoes and homophobic slurs at residents of the Gay Village are being “treated very seriously.”

However, Enza Anderson, who has been harassed in the past, called the students “teens of terror” and has organized a public meeting to discuss what she describes as homophobia in the community after a recent attack.

Paul Winsor, a local florist, was singled out by a group of about 12 students who shouted “faggot” and soaked him with two frozen beverages last Monday. The 49-year-old narrowly dodged an airborne chunk of ice as he chased the teens before they ducked into the school at Jarvis and Wellesley Sts.

“A slushie drink is one thing — it stains your clothes and hurts your pride — but when it escalates to chunks of ice, that’s dangerous,” he said.

The “slushie facial” is a popular form of bullying on the musical TV series Glee.

Local advocates say the school is at fault for not policing the kids and teaching them tolerance, as the school sits in the middle of Toronto's gay village. A public meeting is being held on February 9 at the 519 Church Street Community Centre, and police have stepped up patrols in the area.

Slushie attacks, as they appear on Glee, AFTER THE JUMP…