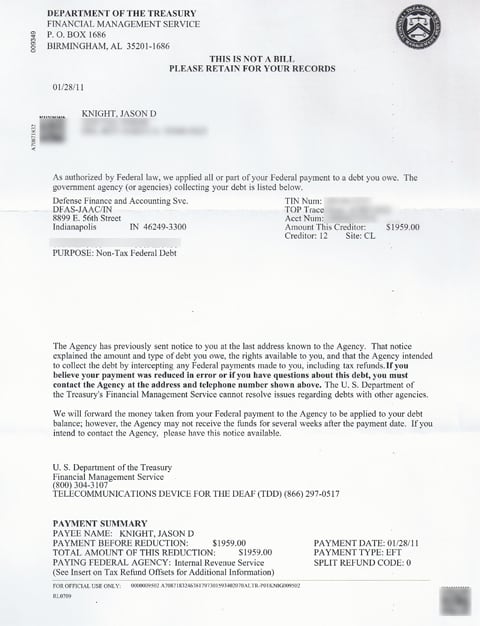 Regarding Dan Choi's announcement last week that he is refusing to pay a claim from  Defense Department Finance and Debt Services of $2,500 for the "unearned portion" of his Army contract, due to his discharge under 'DADT', Former Petty Officer 2nd Class and Hebrew linguist Jason Knight sends along this notice, with a note.

The military has a long tradition of recouping money from service members who are discharged under the law known as Don't Ask, Don't Tell. If discharging GI Jane or Joe because they happen to be different, telling them they need to repay the government because of they are different is insult to injury, as well as reinforcing negative stereotypes. From tuition of ROTC students, military sign-on bonuses to unfulfilled contracts, the military is getting their money's worth for employing lesbian, gay and bisexual service members.

In 2005 I was discharged from the military for the first time because I annulled my marriage after discovering my sexual orientation. Regardless of misplacing the DADT discharge paperwork, recalling me back to service and serving a year in Kuwait and continues communications with the Defense Finance  and Accounting Service to rectify the situation, I am still forced to repay my $13,000 sign-on bonus I received in 2001. After zeroing my account when I was discharged in 2005, I refused to pay this grievous loop-hole the government circumvents to continue to persecute LGBT veterans. So for the last six years, all of my tax returns have gone toward repay this "debt" including my 2010 tax return of $1959 that included a $1000 tax credit for being a full-time student.

So Dan Choi, be prepared to receive a letter in the mail that your tax return has been recouped to pay the debt the government has so willingly given you for being a gay man.

Knight told the story of his discharge under 'Don't Ask, Don't Tell' in SLDN's 'Stories from the Frontline' series.

I posted it back in May, and you can read it here.