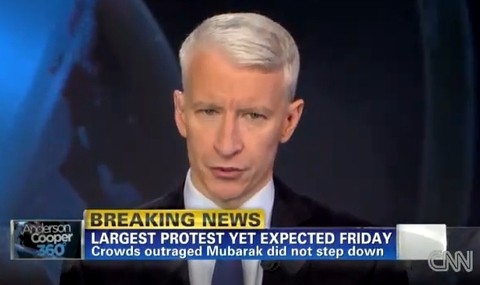 During special coverage Mubarak’s speech declaring he would stay in office, Cooper called the president’s speech “a slap in the face” and full of “lies,” like Mubarak’s claims that he was standing up against foreign pressure.

Later, on his own show, Cooper, who fled Egypt after being repeatedly attacked by protesters, put his feelings in even clearer terms:

The Mubarak regime would have you believe that he’s transferred nearly almost all his power to his vice president. Now, that may be true, but as these protesters in Liberation Square will tell you, his vice president is cut from the same hard stone as Mubarak. And Mubarak himself refuses to step down.

At this hour, a dictator and his regime have made clear they do not intend to give up real power.

At this hour, a dictator and his regime have made clear they do not intend to give up real power.

“The Egyptian government must put forward a credible, concrete and unequivocal path toward genuine democracy, and they have not yet seized that opportunity,” said Mr. Obama. “We therefore urge the Egyptian government to move swiftly to explain the changes that have been made, and to spell out in clear and unambiguous language the step by step process that will lead to democracy and the representative government that the Egyptian people seek.”

Protesters are already crowding Cairo’s streets today as anger builds, and most predictions foresee the situation getting far worse before it gets better.

Watch Cooper’s remarks on Mubarak’s speech, AFTER THE JUMP…