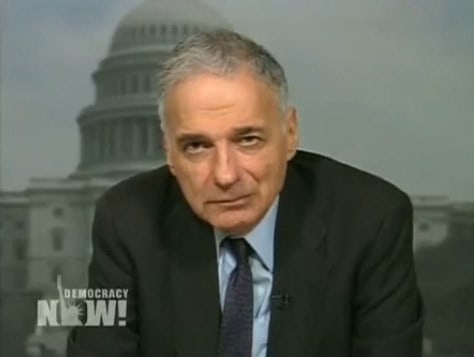 “Barack Obama is committing the same crimes [as Bush and Cheney], in fact worse ones in Afghanistan. Innocents are being slaughtered, we’re creating more enemies, he’s violating international law, he’s not constitutionally authorized to do what he’s doing, he’s using State secrets, he’s engaging in illegal surveillance, the CIA is running wild without any kind of circumscribed legal standards or disclosure. Why don’t we say what’s on the minds of many legal experts; that the Obama administration is committing war crimes and if Bush should have been impeached, Obama should be impeached.”

Watch Nader, AFTER THE JUMP…

President Obama sent a letter defending the Libya intervention to members of Congress on Monday in an effort to quell a growing rebellion over his failure to consult the Senate and the House of Representatives before embarking on the third major military action of his presidency.

In the letter, Obama attempted to address criticism that he had failed to either brief or discuss his decision in detail with both Democrats and Republicans. Under the US constitution, Congressional approval is required for declarations of war.

And what's the meaning of Odyssey Dawn anyway?

Odyssey Dawn started as a sort of unclassified code name, so that during the planning stages people could talk openly about working on Odyssey Dawn without giving away the nature of the project, says Elliott. But instead of coming up with a catchy, ready-for-prime-time name like Desert Storm when the operation was approved, they stuck with Odyssey Dawn.

"A lot of people have called trying to find meaning in the name," says Elliott. "The bottom line is that it was designed so there is no meaning."