New York Democratic state senator Carl Kruger, who surrended to federal authorities on corruption charges yesterday, took $1 million in bribes which his boyfriend helped launder. Everyone knew he was a closet case, but this corruption case has blown the door wide open for the hypocrite politician, who cast votes against same-sex marriage last year. 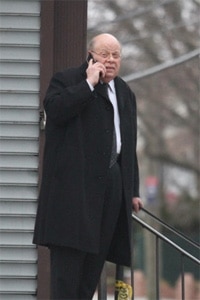 The charges include allegations that Kruger, Brooklyn Assemblyman William Boyland and previously convicted Queens Assemblyman Anthony Seminerio — who died in prison in January — received bribes and other largesse to help two competing health-care companies buy hospitals, and direct state funds to those firms.

Kruger's constant companion, Turano, is accused of using bribe money he deposited in two shell companies for Kruger to pay the lease on a Bentley luxury sedan, credit-card bills and the mortgage on the garish, multimillion-dollar Mill Basin home where the two men for years have shacked up with Turano's mom and brother, authorities and neighbors said.

"Sen. Kruger had a close and intimate relationship with the entire Turano family, which includes one of the defendants, Michael Turano, along with his mother and brother," US Attorney Preet Bharara told reporters yesterday.

It's good to see Kruger go down, but it's a shame that it hasn't happened sooner.

Previous Post: « Movies: My What Big Legacy You Have
Next Post: Watch: Sarah Palin Wants Julianne Moore to ‘Spring for Her Kids’ Braces’ Because of ‘Game Change’ Role »