Democratic New York Senator Ruben Diaz, perhaps the NY Senate's leading voice against same-sex marriage, has responded to the announced launch of a campaign to pass marriage equality in the state with a statement attacking Governor Cuomo for having the gall to launch it during Holy Week. 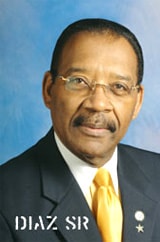 Says Diaz, in the statement:

I am deeply offended that during this Holy Week, which is a most sacred time to millions of New Yorkers, Governor Andrew Cuomo is working hard to mobilize elected officials to legalize homosexual marriage in New York.

“We all know that Governor Andrew Cuomo’s Budget, which was done in haste to beat the clock, will cause tremendous suffering to countless New Yorkers – especially Black and Hispanic communities.  His cuts will hurt students, senior citizens, the sick, the poor and the needy.

“Now Governor Cuomo is targeting communities of faith in an effort to redefine marriage. The most basic tenets of New York’s largest faith communities include defining marriage as between one man and one woman. These religions that cherish these values include Catholic, Christian, Jewish and Muslim.

Diaz goes on to urge his colleagues and religious leaders to oppose marriage equality in New York.

Read the full statement at Politics on The Hudson.