Kobe Bryant says he will appeal the $100,000 fine against him for the anti-gay slur he directed at a referee at Tuesday night's game: 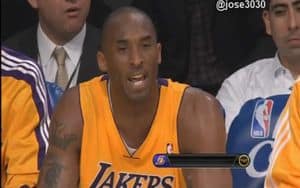 Bryant, talking from Sacramento on the Mason & Ireland show on ESPN 710 Radio in Los Angeles, said the appeal is "standard protocol," but also took responsibility for his choice of words said "out of frustration during the heat of the game."

"The comment that I made, even though it wasn't meant in the way it was perceived to be, is nonetheless wrong, so it's important to own that," Bryant said. He added, "The concern that I have is for those that follow what I say and are inspired by how I play or look to me as a role model or whatever it is, for them not to take what is said as a message of hate or a license to degrade or embarrass or tease. That's something I don't want to see happen. It's important for me to talk about that issue because it"s OK to be who you are, and I do'n't want this issue to be a part of something or to magnify something that shouldn't be."

Audio of the interview is online here.

“Kobe Bryant’s comment during last night’s game was offensive and inexcusable. While I’m fully aware that basketball is an emotional game, such a distasteful term should never be tolerated. Accordingly, I have fined Kobe $100,000. Kobe and everyone associated with the NBA know that insensitive or derogatory comments are not acceptable and have no place in our game or society.”

Bryant makes about $30 million a year.