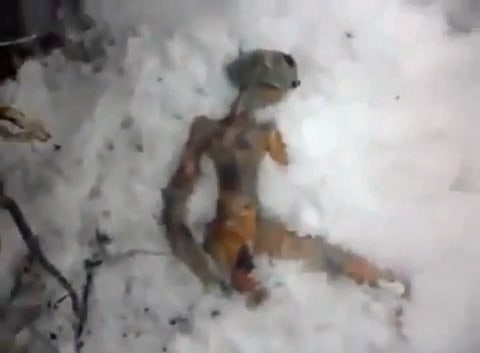 So you may have seen the 'believe it or not' video of the week — "dead alien" discovered after the alleged crash-landing of a UFO in Siberia that has received hundreds of thousands of views on YouTube. It was, of course, a hoax.

The tiny 'dead alien' is just skin from chicken filled with bread, reports the website 7d.org.ua. Police questioned the men who claimed to have found the "body" and they allegedly confessed to creating it themselves. The chief editor of the local Kabansk-Info newspaper initially thought that it was the body of an infant in the video and alerted the police. Officers immediately started the investigation and identified the alleged author.

They went to his house and asked him about the infant's body. The scared man reportedly showed a fake alien corpse. It was even painted in 'alien colors'. Scolding is the only possible punishment for such a stunt as it cannot be considered a crime, the report says. The footage was taken near the village of Kamensk in the Russian republic Buryatia, just north of Lake Baikal. It showed what appeared to be a humanoid body less than a meter high with a skeletal big-eyed head and thin naked body. One of its legs was missing.

Emotional off-screen comments said the body was found a couple of hours before and was clearly very dead. Local media reported there were numerous reports of UFO sightings in the area in March, some of them later attributed to bombing training at a nearby military range.

Because wouldn't a dead alien look exactly like a cross between E.T.'s fetus and the visitors from Close Encounters of the Third Kind?