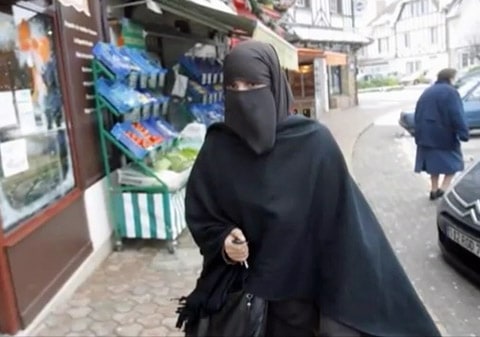 A French ban on wearing full burkas in public goes into effect today. Over the weekend, dozens were arrested at a protest in advance of the ban, in front of Notre Dame Cathedral:

Journalists at the scene said the arrests came after police moved in to break up the protest which had not been authorised. On Saturday police arrested 59 people, including 19 veiled women, who turned up for a banned protest in Paris against the draconian new law, the first of its kind to be enforced in Europe.

Earlier, French police said they will be enforcing the country’s new burka ban "extremely cautiously" because of fears of provoking violence. They fear Muslims extremists will use the law to provoke fights with officers, while rich visitors from countries like Saudi Arabia will also cause trouble.

Two more women were arrested today as the ban went into effect.

One woman has become the "face" of the protests:

Kenza Drider, a respectable mother-of-four, will leave her home in Avignon's Place de la Résistance on Monday with the intention of committing a crime. If the police are waiting for her – and they have had more than enough warning – she will be cautioned, perhaps be asked to accompany officers to the local station, possibly face a fine and, perhaps, will leave with a criminal record.

Watch reports on the ban from the AP and Russia Today, AFTER THE JUMP…