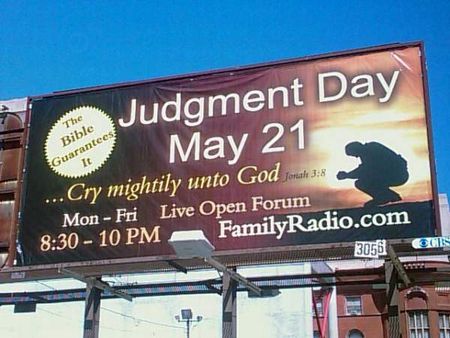 The end of days predicted for today by anti-gay pastor and talk radio host Harold Camping has failed to arrive. But you knew that already, didn't you? Camping was also wrong about a similar prophecy he made in 1994.

The International Business Times has now made a prediction of their own: that the end is nigh for Camping's organization, Family Radio, estimated to be worth about $72 million.

"In all likelihood, his ministry will be destroyed…there is no escaping his failed 2011 'Doomsday' prediction. He painted himself into a corner by using words like 'guaranteed' and 'without any shadow of doubt.' His massive publicity campaign just made it worse."

I was able to access the Family Radio website just a bit ago but it's now inaccessible.

Taiwan's Next Media Animation gave the whole doomsday scenario the animation treatment. Watch the video, AFTER THE JUMP.