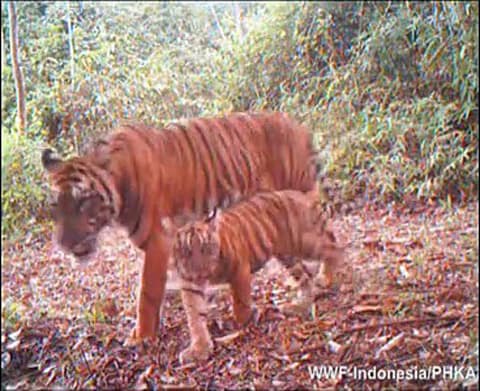 Conservationists are renewing calls to save an Indonesian forest after camera traps recorded a record 12 endangered Sumatran tigers in the area in the space of two months, AFP reports:

The video, recorded in March and April, shows two mothers with four cubs and another six of the critically endangered big cats in the Bukit Tigapuluh wildlife reserve in eastern Sumatra.

"That was the highest number of tigers and tiger images obtained… we've ever experienced," WWF tiger researcher Karmila Parakkasi said in a statement.

The WWF said the 12 tigers were concentrated in locations with good forest cover, including in a land concession belonging to Barito Pacific Timber, which it described as a wood supplier to regional giant Asia Pulp and Paper (APP).

Said the WWF's forest and species programme director Anwar Purwoto: "WWF calls for all concessions operating in this area to abandon plans to clear this forest and protect areas with high conservation value."

There are less than 400 Sumatran tigers in the wild.

Watch the video footage, AFTER THE JUMP…