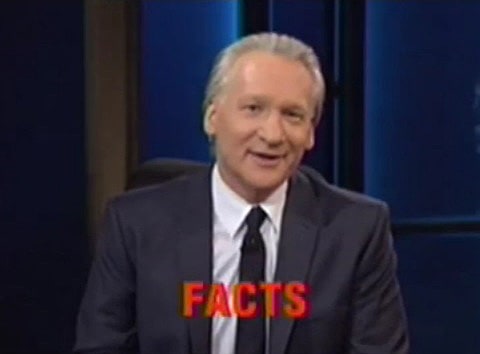 Bill Maher let mainstream Republicans and conspiracy theorists have it in a major response rant to the capture and killing of Osama bin Laden.

“Now that it’s become clear that the Republicans, the fiscally conservative strong on defense party are neither fiscally conservative nor strong on defense, they have to tell us what exactly it is they’re good at. It’s not defense. 9/11 happened on your watch, and you retaliated by invading the wrong country, and you lost a 10 year game of hide and seek with Osama Bin Laden, and you’re responsible for running up most of the debt, which more than anything makes us weak.”

“You’re supposed to be the party with the killer instinct, but it was a Democrat who put a bomb in Gadhafi’s bedroom, and bullet in Bin Laden’s eye like Moe Green. Raising the question how many Muslims does a black guy have to kill in one weekend before crackers climb down off his ass? Let’s look at some facts. Now for you Fox News viewers feel free to turn down the sound until the flashing facts light at the bottom of your screen disappears.”

Check it all out, AFTER THE JUMP…