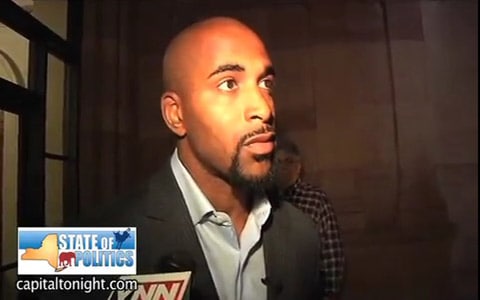 Former NY Giant David Tyree tells the New York Daily News that he would trade his famous catch and his Super Bowl XLII win to stop gays from being allowed to marry:

"The catch was a gift, it's not like I'd try to do it. I couldn't do it again so that was a miracle," he said. "There's nothing worth more than [maintaining heterosexual marriage] right here for me."

Asked if he'd give up the Super Bowl to stop gay marriage, Tyree said: "Honestly, I probably would."

"Nothing means more to me than that my God would be honored," he said. "Being the fact that I firmly believe that God created and ordained marriage between a man and a woman, I believe that that's something that should be fought for at all costs."

"So I'll lay down everything I am to preserve the honor and integrity of the God that I serve."

Watch a separate video of Tyree from today at the Capitol where he joined anti-gay demonstrations, AFTER THE JUMP…