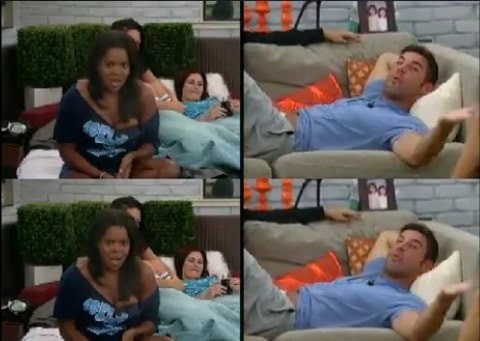 Big Brother 13 contestants Jeff and Kalia got in an argument on the live feed over the fact that J.K. Rowling wrote Dumbledore as a gay character. Jeff believes that Dumbledore couldn't be gay because it's wrong for gays to be around little kids.

Jeff says "Who's Dumbledorf.. who is that, the big guy?".. Rachel then says "why would she want a gay character?" while Jeff in the background says "That would be perverted!" Kalia explains that she made the character so that her kids and other kids would understand homosexuality.

Jeff says "how is he meant to be gay? he doesn't have any gay tendencies…" Kalia interrupts and says "maybe that's the point! so that people like you don't stereotype gay people".

Jeff says "WHAT DO YOU mean stereotypes around gay people? He's in a school with little kids, you can't make THAT GUY GAY!"

Jeff says "it isn't right to have it in a little kids book, and have the head master locked away in this magical land, be gay. That isn't the right kind of writing to do."

Kalia doesn't see anything wrong with it. "I don't see why not!"

Jeff says to her "Listen, you know what I'm talking about and don't make it seem like your doing the right thing by saying it's not! You are going to let your kids read a story book where little kids go to fantasy camp without their parents and the guy is GAY?"

Kalia: "Just because he is gay, doesn't mean there is a thing wrong with him!"

It's not the first time Jeff, a returning housemate, has shown that he's a homophobe on the show. Some of you may recall that he called Russell a "fag" in Big Brother 11, later saying, “F**k you, you f**king homo faggot”.

Watch the clip, AFTER THE JUMP….