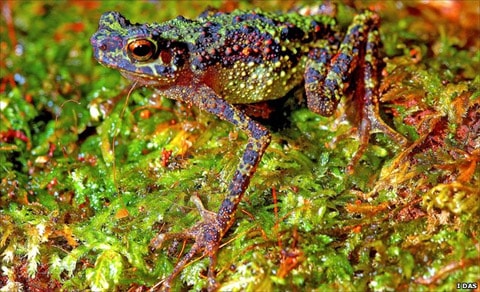 Borneo's Rainbow Toad was thought to be extinct, and has not been seen since 1924, the BBC reports:

Prior to these images, only illustrations of the toad had existed. These were drawn from specimens that were collected by European explorers in the 1920s. Conservation International, which launched its Global Search for Lost Amphibians in 2010, had listed the toad as one of the "world's top 10 most wanted frogs".

Dr Indraneil Das led a team that searched the ridges of the Gunung Penrissen range of Western Sarawak, a boundary between Malaysia's Sarawak State and Indonesia's Kalimantan Barat Province.

After several months of night-long expeditions, one of Dr Das's graduate students eventually spotted a small toad in the high branches of a tree.