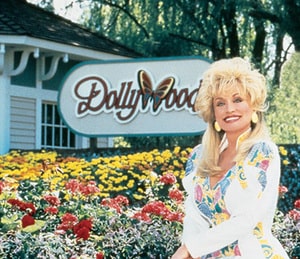 Dolly Parton has a history of pro-equality politics. The employees at her Tennessee-based amusement park? Not so much.

Lesbian couple Olivia Odom and Jennifer Tipton took their children to Dollywood’s Splash park earlier this month and found themselves stopped at the gate for Odom’s “Marriage is So Gay” t-shirt, which employees told her to remove or turn inside out.

“I looked at him and I was like really? He said ‘This is a family park,'” Odom told local NBC affiliate WBIR.

“I was in disbelief. I didn’t think it was the policy of Dollywood to discriminate against the LGBT community,” she said. “I was curious what he found offensive about the shirt. If it was the fact that it had the word gay on it or that it was in conjunction with the word marriage.”

Odom also pointed out that at least one other patron was wearing a t-shirt bearing a Confederate flag, but in the end, she turned her shirt inside out, lest she ruin the children’s trip.

A park spokesperson explained to The Advocate that the park’ss “front gate hosts are asked to enforce our dress code policy.”

“It doesn’t have anything to do with who the people are or what their belief system is or with anything other than the fact that we try to prevent as best as we can upon entry of the park one of our guests being offended by something someone else is wearing,” said Pete Owens. He also described the incident as a “misunderstanding” and vowed to call Odom and Tipton to further discuss the situation.

Parton was not available for comment, but something tells me she’ll be less than pleased by the news.

Watch WBIR’s report on Odom’s story, AFTER THE JUMP…