Top Oakland A's pitching prospect Ian Krol has been suspended indefinitely by the franchise for a tweet containing an anti-gay slur which has since been deleted, NBC Sports Hardball Talk reports: 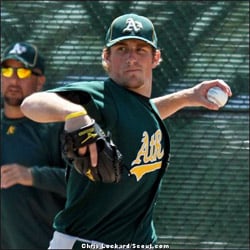 Krol had all of 90 twitter followers prior to the announcement, but the A’s were obviously keeping tabs on him.

Larry Brown Sports adds: "Krol was suspended from his baseball team as a high school senior for an alcohol-related incident but he was still drafted in the seventh round by the A’s in 2009. About the only smart move he seems to have made recently is deleting his twitter account. Krol, who has been on a rehab assignment with Oakland’s rookie ball team, enjoyed plenty of success last season. The southpaw went 10-4 with a 2.80 ERA, spending most of his time pitching for the Double-A Midland RockHounds of the Texas League."