Mitt Romney has said he won't sign a "marriage vow" pushed by social conservative Iowa group The Family Leader which asked candidates to put their signature on a pledge to oppose same-sex marriage, Sharia law, infidelity, and pornography. 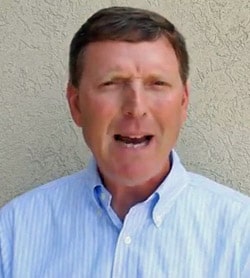 The document also contained a section which said that African-American families were better off during the time of slavery.

That section was removed after public outrage, but not before Michele Bachmann and Rick Santorum had both signed the pledge.

Romney is the first GOP candidate to reject signing the vow, the AP reports:

Andrea Saul told The Associated Press on Tuesday that Romney "strongly supports traditional marriage," but that the oath circulated last week by The Family Leader "contained references and provisions that were undignified and inappropriate for a presidential campaign."

Romney is three points behind Bachmann in the latest GOP Iowa straw poll.

In a video posted today, Bob Vander Plaats (pictured), the head of The Family Leader and the leading anti-gay activist in Iowa, posted a video trying to explain what the "marriage vow" means and what he meant by the slavery reference.