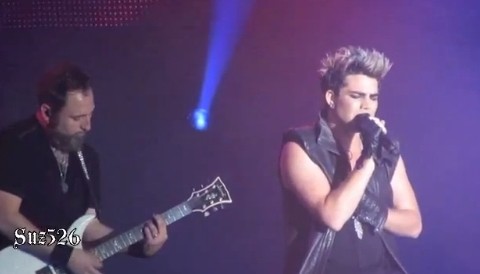 Adam Lambert has been a busy boy.

In addition to recording his upcoming Behind the Music for VH1, the openly gay singer appeared at Quebec’s Le Festival Ste-Agathe en Feux Festival yesterday. And while there Lambert debuted a new song off of his upcoming album.

Of the song, called “Outlaws of Love,” Lambert said he drew inspiration from his personal experience: “All of the things I’ve been talking about over the past year, all of it boils down to acceptance and this is a song that I wrote about how it feels, that no matter where you go or where you turn, sometimes it feels like you’re just running from the law.”

Watch Lambert belt it out, AFTER THE JUMP…