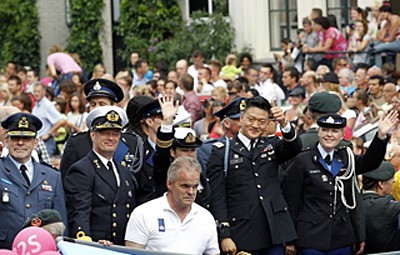 This weekend, in front of half a million Dutch families and revelers, the Amsterdam Gay Pride parade showcased a truly historic statement: 85 gay (including 2 transgender) servicemembers in full dress uniform with Dutch Defense Ministry officials in the first ever sanctioned military gay pride contingent. Three active duty gay generals were with us on the uber-gay float. We were literally floating, too: the canals that line the city of Amsterdam, built in the 17th century, were our parade route. Lots of saluting, lots of cheering, lots of dancing… lots of "IN THE NAVY" blasted over and over and over again.

Watch video of the float, AFTER THE JUMP… 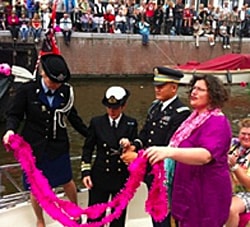 British Lieutenant Commander Mandy MacBain, Chief Diversity and Inclusion officer for the Royal Naval Service joined me in officially opening "Canal Pride 2011" with an appropriate theme: "All Together Now."  In spirit of cooperation we held the scissors together while cutting the pink boa held by leaders of PRO-GAY, the group organizing the parade. Her partner Joanna joined us on the boat, and the three of us comprised the foreign contingent. They set up flags for us near the back of the boat but by the time the parade kicked off, the soldiers pushed us to the front, to stand with their generals. This was quite an unexpected honor. (Photo: Ribbon cutting with (L-R) Dutch LTC Sandra Keijer, British LCDR MacBain, PRO-GAY Chair Irene Hemelaar) credit: PinkPaper.com) 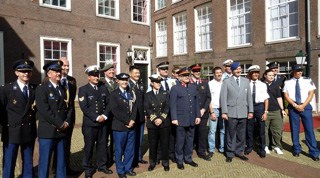 The spirit of solidarity and inclusion was palpable, as the day prior, dozens of gay police officers from INTERPOL countries joined the Dutch LGBT Military Foundation (SHX: Stichting Homosexualiteit & Kriejgsmacht) in a tour including notable sites such as the city zoo, Rembrandt's tomb, and the world renowned "red light district." At the reception afterwards, Dutch Education and Cultural Ministry officials noted the historic nature of this pride parade, and I offered brief remarks about the Stonewall Riots and the success of community police liaisons in our shared duty to protect and serve. The irony was well received, that the only American representative in our group should invoke a violent uprising at a time when LGBT-Police relations were not strong, to put it mildly. On a personal level, the laughter allowed me to exhale a bit, knowing that these police officers were generally supportive of the confrontational activism that has always pushed American LGBT issues forward. (Photo: INTERPOL officers reception, credit: Gerard Rijkers, SHX) 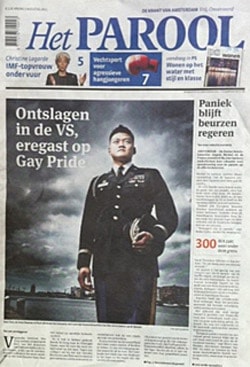 I was surprised to hear reports on the progress of LGBT-Police relations all around Europe, particularly as reported hate-crimes have doubled in gay-friendly Amsterdam. Some point the finger at Muslim refugees while others laud the confidence LGBT Dutch have to report assaults and harassment. Either way, our work must focus on eradicating the source of bigotry while bridging gaps between oppressed communities. Returning violence for violence will solve nothing in our common struggle for justice.

It was also very enlightening to find there were 4 chaplains celebrating Pride with us, although they did not refer to their branch as The Chaplaincy. Calling themselves Moral Counselors, the Dutch military focuses more on the wartime need of soldiers to meet with a kind ear and warm heart in moments of despair. They still recognize denominations, but the Humanist variety was new to me. Indeed, when the majority of religious denominations expel and stigmatize their LGBT congregants, the state must find a way to provide equal dignity and counseling for those who would never return to a chapel. Especially if the chaplains are allowed to denounce minorities by way of religious protections, as they will in the US even after Don't Ask Don't Tell repeal.

My presence at the festivities was poignant to many in The Netherlands who followed the Don't Ask Don't Tell debate closely this past year. One activist American general in particular drew the ire and ridicule of many when he contended last year before the US Senate that openly gay Dutch soldiers caused the massacre at Srebrenica (Kosovo). I am happy that our presence could serve as some repudiation of some American individuals who happily stir international uproar to satisfy their own selfish political motives. His bogus testimony and our first White House arrests were highlighted in the same news story along with the legacy of Technical Sergeant Leonard Matlovich on Dutch national TV. 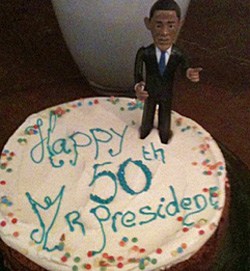 In my off time, I spoke at a meeting of the "Democrats Abroad" and met the Ambassador and some expatriates. Not surprisingly, many of these American-Dutch are gay and eagerly await immigration equality legislation and presidential action. While they live abroad, their influence does not end at the border or the absentee ballot: the perspective they provide Americans struggling for equality is critical. I learned that even I am complacent and too eager to celebrate partial equality as if it were the real thing. Seeing America from abroad usually makes us grateful to be American; it was certainly the feeling I got when returning home from Russia earlier this summer. But coming home from Amsterdam made the reality bitter: we have a long way to go before we can truly celebrate like the Dutch. The Democrats event was topped off with a Barack Obama birthday cake, topped with a dramatic Obama figurine. When I saw it I told myself "This has to be a practical joke." Well, I broke two gay activist rules: early celebration and dessert. I tried to resist, but my new friends decreed "let him eat cake."

While the weekend was a well-needed break for me, I also learned that the Dutch, even with their advances that put America to shame, are not satisfied with their equality struggle. Pink and Purple buttons carrying the new platforms: Gay History Education in Schools, and Everyone Officiate Gay Marriages (including religious bigots). The two slogans were prominently displayed on just about every bridge and in the sky-messaging carried by four "Pride airplanes." The Amsterdam Mayor and Justice Minister reminded me that they are not happy with political speeches alone, and their work reflects a true desire for justice. As their national government was unveiling a first-of-its-kind coalition platform for LGBT Equality with full cooperation from every ministry and government sector, I knew they were putting their money where their mouth was. The budgets for every state project and government ministry took a cut this year: all except one. The LGBT education project, intended to help international progress on LGBT equality actually received a budget increase. I know we can expect great things from this country for years to come. 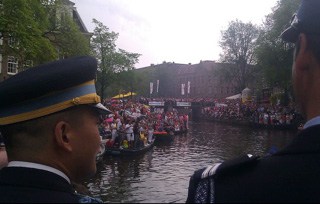 Overall, I did not expect the kind of welcome we received. For whatever reason, I'm always looking for the one opponent in the crowd nowadays. Only one was visible, flipping us the middle finger from his stoop. It wasn't that we was anti-gay though. He carried a peace flag and shouted something about war, according to the soldiers I asked. Among the hundreds of thousands, not bad to have only one detractor. I suppose it is safe then to say this country loves its soldiers and its gays.  [Photos: Dutch National Paper 8/5, Amsterdam Pride credit: AP]

Watch a video of the float Choi rode on, AFTER THE JUMP…