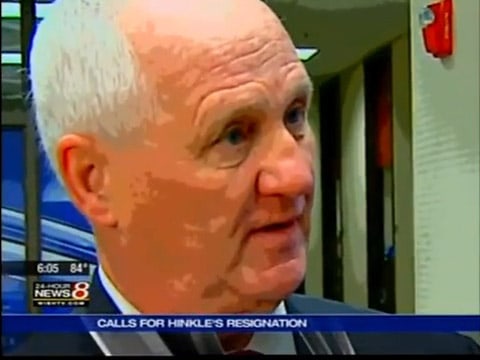 Anti-gay Indiana Rep. Phil Hinkle, who was caught earlier this month paying $80 to a male teen for sex after responding to an ad on Craigslist, is refusing calls, now public, from the House Speaker, for him to step down. The calls from Speaker Brian Bosma follow similar pressure last week from a wide range of officials.

Hinkle is also being removed from committees.

He said that he understands why he's being stripped of his committee chairmanships and that he won't seek re-election. But he said he will not resign, despite House Speaker Brian Bosma's call Tuesday to do so.

And he said he did nothing illegal with — or to — the young man and that he himself was the victim of a crime. But he said he would not file a police report.

Said Hinkle in his first public comments since the incident: "I was on the road to self-destruction, and I don't know why….I say that emphatically. I'm not gay…I went to the edge, but I didn't fall over the edge."

Watch two news reports on the calls for Hinkle to step down, AFTER THE JUMP…