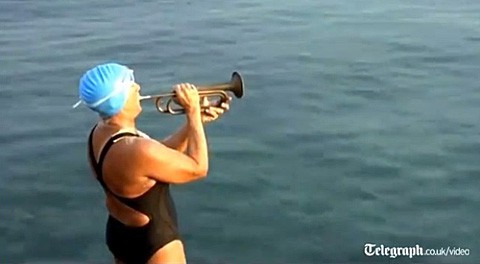 Sixty-one-year-old former world-record holder and out lesbian swimmer Diana Nyad set off on a 103-mile swim today across open water from Cuba to Florida, through the Straits of Florida. Nyad is swimming without a shark cage. If she completes the swim, she'll be the first to do it without the cage.

Nyad played 'Reveille' on a bugle before plunging into the water and beginning her swim. 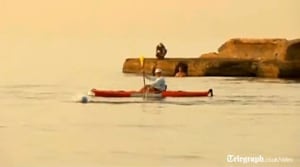 Said Nyad earlier in the day: "I also want it to be a moment for thousands, and I dare say millions of people my age, who are going to look and say, '60!' The joke is 60 is the new 40, and it's true. We are a younger generation than the 60 that went before us."

Nyad will be relying on special equipment that surrounds her with an electric current imperceptible to humans but strong enough to keep most sharks at bay. Whitetip sharks are not deterred by the field, so divers will be standing by to gently discourage any of those who get curious – without harming them.

In 1979, Nyad set a world-record for open water swimming without a cage, on a 102.5 mile swim from the Bahamas to Florida.

Watch the beginning of her swim, AFTER THE JUMP….

Previous Post: « Sarah Palin Asked if Her Political Career is Over: VIDEO
Next Post: Marcus Bachmann Okay with Being Called ‘Silver Fox’ as Long as it Doesn’t Mean He’s Gay »