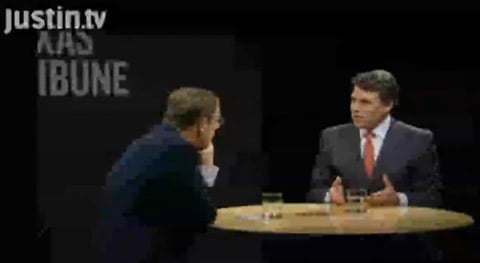 Evangelical beliefs trump logic most of the time for Rick Perry, particularly in this jaw-dropping clip of his inability to answer a question about the disconnect between abstinence education and teen pregnancy rates.

The problem here isn’t just that Perry has the wrong answer. The more meaningful problem is that Perry doesn’t seem to know how to even formulate an answer. He starts with a proposition in his mind (abstinence-only education is effective), and when confronted with evidence that the proposition appears false (high teen-pregnancy rates), the governor simply hangs onto his belief, untroubled by evidence. As Jon Chait put it, Perry seems to struggle “even to think in empirical terms.”