More stringent recruiting criteria for participants in a new study on male bisexuality has led researchers to confirm, as opposed to a 2005 study which supported a stereotype of bisexual men as closeted gays, that bisexual men do, in fact, exist, the NYT reports: 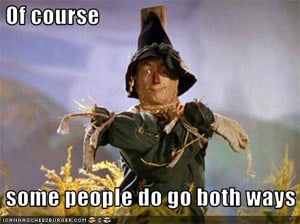 To improve their chances of finding men aroused by women as well as men, the researchers recruited subjects from online venues specifically catering to bisexuals. They also required participants to have had sexual experiences with at least two people of each sex and a romantic relationship of at least three months with at least one person of each sex.

Men in the 2005 study, on the other hand, were recruited through advertisements in gay-oriented and alternative publications and were identified as heterosexual, bisexual or homosexual based on responses to a standard questionnaire.

The results, like a similar one done in March, revealed differences between the participants:

In both studies, men watched videos of male and female same-sex intimacy while genital sensors monitored their erectile responses. While the first study reported that the bisexuals generally resembled homosexuals in their responses, the new one finds that bisexual men responded to both the male and female videos, while gay and straight men in the study did not.

No Surprise for Bisexual Men: Report Indicates They Exist [nyt]