No illegal substances contributed to the death of Amy Winehouse, according to toxicology reports returned to her family, their spokesman Chris Goodman said today. 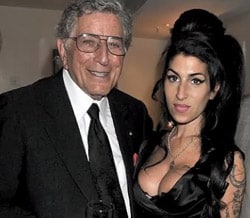 In a statement, he added that alcohol was present, but that it could not be determined what part, if any, it played in her death.

"Toxicology results returned to the Winehouse family by authorities have confirmed that there were no illegal substances in Amy's system at the time of her death," the statement read. "Results indicate that alcohol was present but it cannot be determined as yet if it played a role in her death."

It added that Winehouse's family were awaiting the outcome of an October inquest into the "Rehab" singer's death.

Winehouse had recently recorded a duet with Tony Bennett titled "Body and Soul" for Bennett's upcoming album. A snippet of the song has just been released.