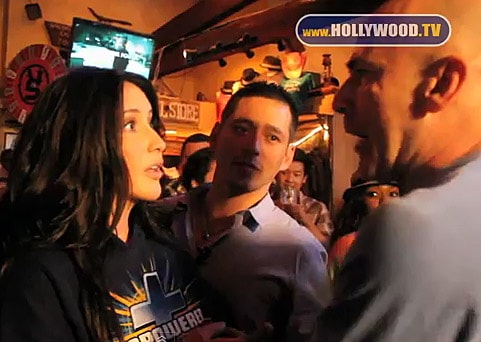 While shooting her reality TV show, Bristol Palin got into it with a gay man who heckled her as she rode a mechanical bull at the Saddle Ranch bar in West Hollywood.

Hollywood TV writes: "Bristol Palin…was enjoying her time at West Hollywood's Saddle Ranch restaurant with her friends and the film crew of her new reality show. Bristol got on the mechanical bull and rode it. But, as Bristol fell off the mechanical bull a man from the bar started shouting things to Bristol such as 'Your mother is a whore,' 'Did you ride Levi like that,' and 'Your mother is a f***ing devil.' Well Bristol was not happy and having any of that especially in front of her film crew and the paparazzi. Bristol quickly walked over and confronted the man and both began shouting and arguing."

PALIN: "Alright, is it because you're a homosexual?"

MAN: "Pretty much. And why'd you say I'm a homosexual?"

PALIN: "Because I can tell you are. This is your boyfriend. And that's why you don't like my mom.