Teonna Monae Brown, 19, who pleaded guilty last month to first-degree assault and a hate crime in the beating of Chrissy Lee Polis, 22 (pictured), was sentenced to 10 years in prison on Tuesday, with five years suspended, plus three years of supervised probation. The maximum sentence for Brown's crimes is 35 years. 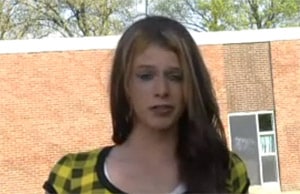 Advocates were upset by the ruling, the Baltimore Sun reports:

"The whole incident is unfortunate and demonstrates the lack of knowledge and understanding, and discrimination against transgender people," said Patrick Wojahn, board president of the Equality Maryland Foundation. "If anything, five years may have been too short of an amount of time for the attack and the amount of hatred that was shown in the incident."

Del. Joseline Pena-Melnyk agreed. "Five years is not enough for what she did. It was really horrible — nobody should do something like that to another human being," said Pena-Melnyk, who represents parts of Anne Arundel and Prince George's counties. She proposed legislation to prevent employers, creditors and others from discriminating against transgender people, but the measure failed in the 2011 General Assembly.

Shellenberger said that "it was very important that even though this defendant has no criminal record, that she receive substantial time in jail." He said the violence of the repeated assaults warranted it.

"I don't care who the victim is. This was not a political statement," he said.

Watch a news report on the sentencing and an interview with Shellenberger, AFTER THE JUMP…

Baltimore County State's Attorney Scott Shellenberger discusses the sentence. He was pleased with it: