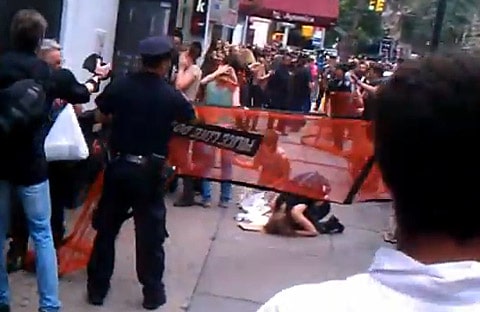 This weekend, Wall Street protesters embarked on what the NYT calls their "largest and most ambitious" march since protests of the financial system began on September 17, and it appears police are losing their patience with the demonstrators.

One video in particular is getting a lot of attention right now:

“A cop in a white shirt — I think he’s a superior officer — just comes along and does these quick little spritzes of pepper spray in my and these three other girls’ eyes,” she added. The officer’s identity was not provided by the police.

The scene around Ms. Elliott verged on the unruly on Saturday. The police made arrests in the area on charges not only of disorderly conduct and impeding traffic, but also of inciting to riot and assaulting a police officer. About 80 people were arrested; some spent the night in jail and were arraigned on Sunday.

Patrick Bruner, a spokesman for the protesters, said he believed that pepper spray was used several times on Saturday. “I think it is very fair to call it police brutality,” he said.

UPDATE: Added another video (via jmg) of more disturbing arrests.