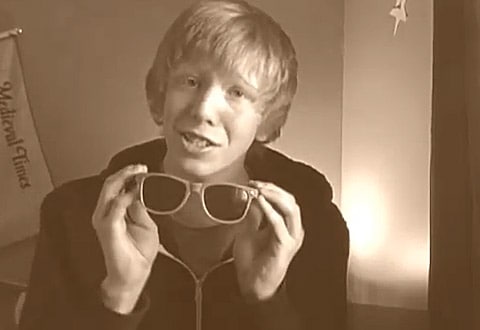 Another horrific gay teen suicide caused by bullying, I'm so sad to report.

Gay 15-year-old Ottawa, Canada teen Jamie Hubley killed himself on Friday. Bullying was apparently to blame, the Ottawa Citizen reports. And like the recent bullying suicide of Jamey Rodemeyer, Hubley documented much of what happened to him online:

Jamie Hubley documented the final month of his life in heartbreaking and painful detail.

The 15-year-old boy, a son of Kanata South Councillor Allan Hubley and his wife, Wendy Barber, kept a blog in which he wrote openly of his struggles with depression and the challenges of being an openly gay teenager.

A gifted actor and singer — he loved Lady Gaga, Adele and Katy Perry, and posted numerous videos of himself singing on his personal YouTube channel — Jamie wrote a month ago that he was looking forward to taking dance lessons this winter. “Something to look forward to,” he wrote. But he also wrote of his sadness and despair, about being called a “fag.”

In a post three weeks ago, he said he was depressed, that medications he was taking weren’t working, and that being gay in high school was so hard — a thousand times harder in real life than on the popular television show, Glee, which he loved. “I hate being the only open gay guy in my school … It f—ing sucks, I really want to end it,” he wrote.

The blog postings are interspersed with angst-filled quotes and startling images of self-harm — gathered from all over the web, as well as other pictures of celebrities, clothing and men kissing passionately.

A cover of Lady Gaga's "Born This Way", AFTER THE JUMP… 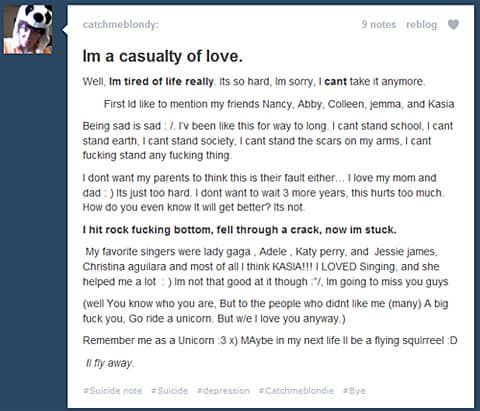