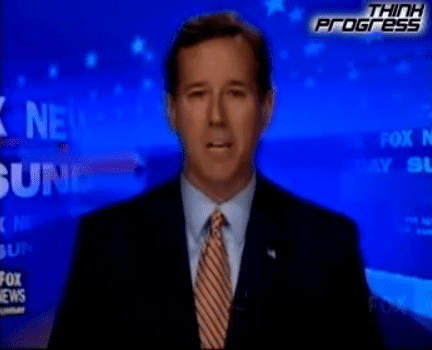 Rick Santorum was on Fox News Sunday this morning, where his conversation with anchor Chris Wallace strayed to the subject of gay men showering with straight men in the military.

The thought of it makes Santorum uncomfortable:

"The problem is that sexual activity with people who you are in close quarters with who happen to be of the same sex is different than being open about your sexuality," Santorum said on "Fox News Sunday."

Fox host Chris Wallace pushed back, asking Santorum if he was suggesting gay soldiers would "go after" their colleagues.

"They're in close quarters, they live with people, they obviously shower with people," Santorum said, saying the presence of gay soldiers could have an adverse "effect on retention and recruitment."

Let's run a thought experiment. Suppose Santorum can choose between two shower rooms, each filled with 100 naked, sudsy men. In the first room, there are five homosexuals, but Santorum doesn't know which ones they are. In the second room, there are also five homosexuals, but Santorum knows exactly who they are. In which room does Santorum feel the most comfortable? Which does he choose?

Then Wallace, who can be hard-nosed with Republicans and Democrats alike, sprung a trick question:

Wallace played a clip of Santorum insisting during a recent Republican primary debate that the repeal of "don't ask, don't tell" was an improper injection of "social policy" into the armed forces. Wallace then presented a quote from a former military official to Santorum and asked whether he agreed with its basic idea: "The army is not a sociological laboratory. … Experiments … are a danger to efficiency, discipline and morale and would result in ultimate defeat."

Santorum, looking uncomfortable, said that he did agree with the general idea of the statement. Wallace then revealed that the quote was from Colonel E.R. Householder, a World War II-era official whose comments were made in opposition to the racial integration of the military.

Santorum tried valiantly to squirm his way out of the trap. He insisted homosexuality is not like skin color because it's a "behavior" and not an irrevocable biological fact. Santorum didn't cite any specific scientific evidence, aside from "studies out there," and I'm guessing he's never heard of the twin studies.