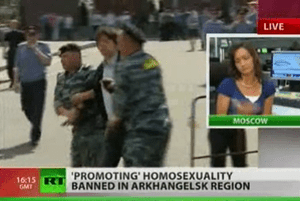 From Russia with hate. First to Moscow, where the gay pride parade has been beset by violence and arrests:

Saturday's protest was one of the few gay rights events sanctioned by authorities. In recent years, several attempts to hold gay pride marches in Moscow and other Russian cities have been blocked by police, Russian Orthodox Church activists and soccer fans.

(Europe's football hooligans have become the vanguard of neo-Nazi violence in Europe. How to explain this weird phenomenon?)

He told The Associated Press that police were "finding out whether (the detained) were part of the rally or the people who tried to thwart it."

During the rally, several men were seen trying to pelt the protesters with tomatoes and unfurling posters with pejorative remarks about homosexuality.

At least Moscow held a gay pride rally at all. Over in the Russian province of Arkhangelsk, authorities have banned all demonstrations by gay people. The repression is "warmly supported" by the Russian Orthodox Church: 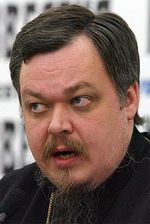 “All priests know that the souls of those who suffered through sinful homosexual experience are empty and desperate,” said Vsevolod Chaplin, head of the Russian Orthodox Church PR department. “And it is this insecurity in a minute-long pleasure that forces these spiritually unhealthy people to hold marches and other public demonstrations.”

Vsevolod Chaplin says that gays are insecure about "a minute-long pleasure." Is he referring to our orgasms? Because if he is, we truly have nothing to be insecure about; we're super-human. But if he's saying that gay sex itself lasts a minute – well, speak for yourself, Vsevolod.

The ban has implications beyond the gay community of Russia. It tells us that the much-ballyhooed post-Cold-War dream of a free, democratic Russia is dying, if not dead.

Watch a report from Russia Today, AFTER THE JUMP…