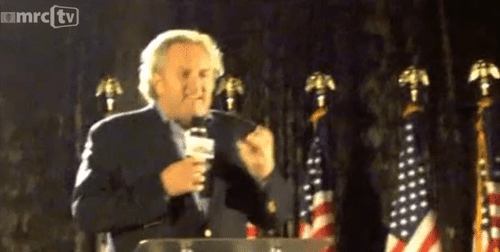 TeaCon 2011, a large Tea Party conference outside Chicago, is turning into a chamber of horrors. Last night, right-wing media mogul Andrew Breitbart (who dreams of civil war) took to the stage in a hotel ballroom and exhorted his largely geriatric audience to run naked through the streets.

He also said that left-wing actress Janeane Garofalo is "Hollywood's sympathy f***" and called Nancy Pelosi a "bitch." Breitbart himself is publicizing those remarks on his own website.

Separately, alleged comedian and Fox News pundit Steven Crowder joked that America is the world's quarterback and Canada its "special-needs cheerleader." A liveblogger at the conference called his stand-up routine "indescribably bad."

There's more. Yesterday, my partner, Brandon K. Thorp, and I reported that one of TeaCon's organizers – the head of the Chicago Tea Party – is a john. For good measure, Tea Party congressman Joe Walsh, who owes $100,000 in child support, is scheduled to grace the event today, joined by Glenn Beck and Republican presidential candidate Herman Cain – plus Bachmann and Perry, who are addressing the conference via video.

So that's family values for you.