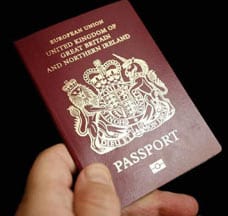 Language on UK passports is being updated to accommodate same-sex couples, the BBC reports:

New forms including "parent one" and "parent two" alongside "mother" and "father" are expected to be brought in by the end of the year.

The Home Office says the additional terms will ensure passports are issued securely and safely to the right person. Gay rights groups say the current form is "discriminatory" but family values campaigners say the changes denigrate the roles of mothers and fathers.

The proposals also include sex-free passports to allow transgender people to opt out of identifying themselves as either male or female.

Christian wingnuts are predictably flipped out by it:

Norman Wells, director of the Family Education Trust, said: "To speak of 'parent one' and 'parent two' denigrates the place of both fathers and mothers. Fathers and mothers are not interchangeable but have quite distinct roles to play in the care and nurture of their children."