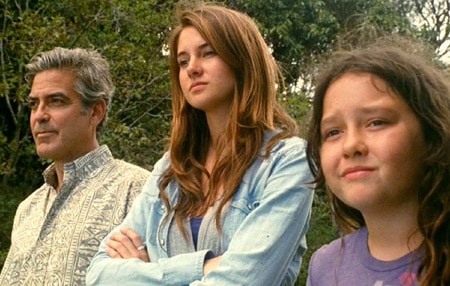 Clooney and his onscreen girls in THE DESCENDANTS

NOW IN THEATERS
Writer/director Alexander Payne (Sideways) is back after a long hiatus with THE DESCENDANTS. The dramedy finds a wealthy Hawaiian landowner (George Clooney) totally at sea with the women in his life (his wife is in a coma, and his daughters are hard to handle) while attempting to find his footing on land as the family prepares to sell their unspoiled prime real estate. It's a certain player in this year's Oscar race. 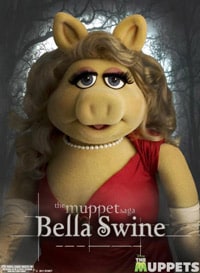 Less certain is whether Academy voters will go for a second round with those dancing penguins in HAPPY FEET TWO.

Meanwhile, mopey terrible-role-model Bella "I'm nothing without a man!" Swan is back to marry her vampire in THE TWILIGHT SAGA: BREAKING DAWN PART 1 but don't make me talk about it. Let's illustrated Bella's return with a photo of Miss Piggy as "Bella Swine" because the world would be a better place with more Muppets (next week!) and less Twilight. Breaking Dawn supposedly has a 35 minute wedding sequence and I swear to god the next person who tells me they thought the brilliant Rachel Getting Married was boring or that the hilarious bridal shower toasts in Bridesmaids went on too long is getting karate chopped. "Hiiii-yaaaaa."

On the topic of Bridesmaids, have you watched the "line-o-rama" feature on the DVD/Blu Ray? It's crazy to to soak in all that discarded improv comedy. Even Rose Byrne can do it! Who knew she had that performance in her? 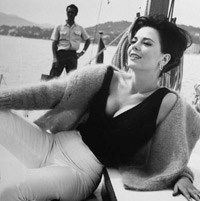 By now you've heard the news that they've reopened the Natalie Wood drowning case. I can't even talk about it  (vivid childhood trauma, circa 1981… the first actress I ever loved). The Robert Wagner family says they support the reopening.

Celebrated television writer Marti Noxon is working on a screenplay for a live action Tinkerbell film to star Elizabeth Banks (who is looking so interesting as "Effie" in that Hunger Games trailer). She recently spoke about the difficulties of getting anything original made. Even genre adaptations like her Pride & Prejudice & Zombies screenplay face tough climbs on their road to the screen. Noxon & Bank's Tink will have to be more worthwhile than Disney's currently ubiquitous reductive bratty interpretation. At the very least we hope the new version of girlpower is more interesting than "buy me clothes!".

Marti's claim to fame is the Buffy the Vampire Slayer television series. I just revisited it and it just never gets old, even as it hits yet more "how can that be ___ years ago?" milestones. 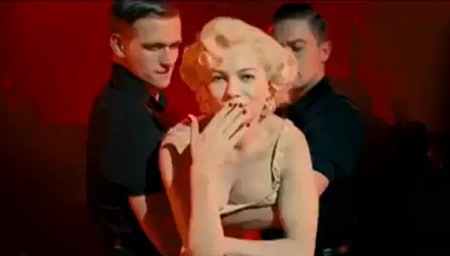 Select cities will get to see Michelle Williams do her best "Marilyn" over the holidays when MY WEEK WITH MARILYN opens. She even sings and dances in the film [check out this interview with one of her backup dancers]. Williams's best work to date has been very naturalistic portraits of low key sorrowful women (Blue Valentine, Brokeback Mountain, Wendy & Lucy) so it's a bit jarring to suddenly see her tackling showy divas like Marilyn Monroe or imagining what she'll bring to Glinda the Good Witch in Oz: The Great and Powerful. She's been flying back and forth between promotions for one and shooting of the other a lot lately. She promises her Glinda will be a reinvention so don't expect any Billie Burke or Kristin Chenoweth mimicry.

Yes, it's true Angelina Jolie's Cleopatra picture is still a possibility. Slow going it is but Rome wasn't built in a day. The project has recently acquired the services of Oscar winning writer Eric Roth so they're still throwing money at it.  Angelina isn't content with just one Great Woman bio though. She's also now attached to the life story of Gertrude Bell who travelled and mapped the world, particularly the Middle East.

And while we're talking up magical women from faraway lands, let's wrap with a short film via W magazine (from a recent photoshoot) called "Planet Tilda". The first couple of shots are so Wicked Witch wandering Iceland's black steamy lava rock fields, aren't they?

Previous Post: « Is There Life in This System?
Next Post: Ed Shadid, Architect Of Oklahoma City Anti-Discrimination Measure »