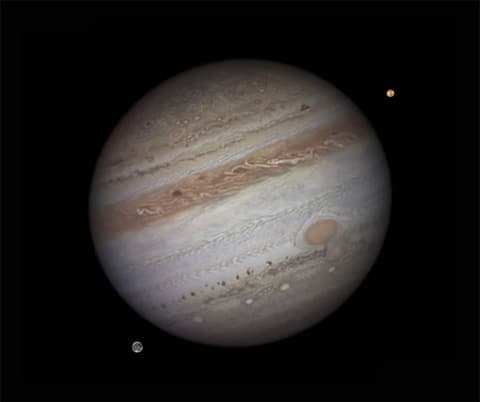 This is the gorgeous winning photo of Jupiter (with moons Io and Ganymede) from The Royal Observatory Greenwich's Astronomy Photographer of the Year competition. View a gallery HERE (via buzzfeed).

The shot was taken by Damian Peach: "This photograph was taken as part of a long series of images taken over a three-week period from the island of Barbados in the Caribbean – a location where the atmospheric clarity is frequently excellent, allowing very clear and detailed photographs of the planets to be obtained. I’ve been interested in Astronomy since the age of ten and have specialized in photographing the planets for the last fourteen years. I’m very happy with the photo and wouldn’t really change any aspect of it."

Check out a video interview with Peach, AFTER THE JUMP…

Cut off from the sun, Europa's subterranean ocean would need some other energy source to sustain life. Hoehler said spacecraft observations show that there is a huge amount of stored energy in Europa's mineral-rich crust, but it is separated from the liquid ocean below by at least 6 miles (10 km) of ice. Like the two terminals of a battery, energy can flow from the surface material to the ocean only if the two are somehow connected, he said.

"What you're hearing about here today would be a way to take this surface material, transport it potentially down into the ocean and in essence tap Europa's battery. When you tap that battery, you move from a system which checks one of the requirements for life to a system that checks a second critical requirement for life, and I think this really impacts the way we consider habitability on Europa."