Just another Black Friday in America.

The riots have begun: 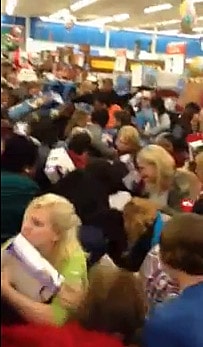 In Porter Ranch, a woman pepper sprayed customers at a Wal-Mart in what authorities say was a deliberate attempt to get more “door buster” merchandise. In San Leandro, a Wal-Mart shopper walking to his car was shot and wounded in a suspected robbery early Friday…

…At Porter Ranch, 20 customers, including children, were hurt in the 10:10 p.m. incident, officials said. Shoppers complained of minor skin and eye irritation and sore throats.

The woman used the spray in more than one area of the Wal-Mart “to gain preferred access to a variety of locations in the store,” said Los Angeles Fire Capt. James Carson.

“She was competitive shopping,” he said.

Check out the riot over a $2 waffle iron at Wal-Mart.