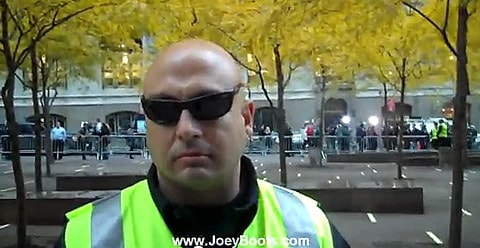 Videographer Joey Boots, a military veteran who has appeared on The Howard Stern Show, was filming down at Zuccotti Park earlier today following the eviction early this morning of Occupy Wall Street protesters, writes:

"These guys in vests in Zuccotti Park were ordering anyone who stopped on the public sidewalk to look to move along and so I and others wanted to know who they were."

One of the guys, later identified as working for Brookfield Properties which owns Zuccotti Park, made the unfortunate mistake of saying "Your fly's open, faggot."