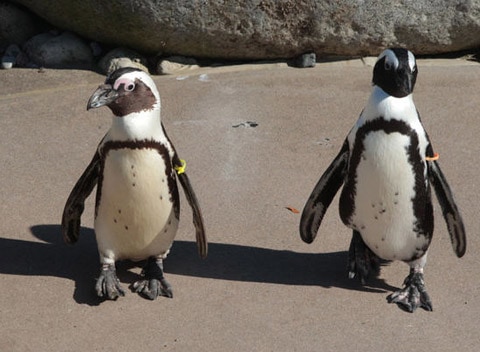 Buddy and Pedro, a bonded, inseparable pair of African penguins at the Toronto Zoo, are going to be split by zookeepers inan effort to breed them, the Toronto Star reports:

They have top-notch genes, so the zoo intends to separate them from each other and pair them with females for breeding. Given that African penguins are endangered, the move falls within a species survival plan among zoos.

Buddy, 20, and Pedro, 10, are in Toronto as part of the popular African penguin exhibit that opened at the zoo in May. The two, bred in captivity, were part of a group of 12 penguins — six male, six female — that came to Toronto from zoos in the U.S. Buddy and Pedro arrived from Toledo, Ohio, where they formed a connection as members of a bachelor flock.

Buddy and Pedro pair off every night, the paper adds:

“They do courtship and mating behaviours that females and males would do,’’ one keeper said in an interview.

Those behaviours include making a “braying’’ sound, almost like a donkey, as a mating call. They defend their territory, preen each other, and are constantly standing alone together. In fact when the Star visited the exhibit this week Buddy emerged from the water, followed a few moments later by Pedro. The two huddled together for quite some time..