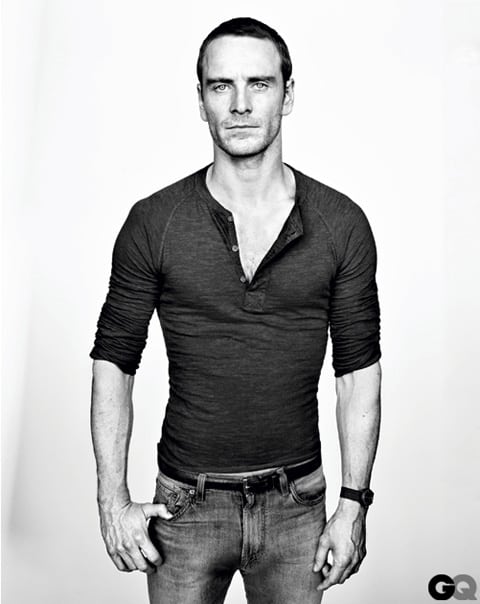 Michael Fassbender (seen above as GQ's 'Breakout Man of the Year') talks to HuffPo about his full frontal scene in Shame, in which he portrays a sex addict, and which begins "begins with the actor naked and laid out on post-sex bedsheets like a strip of raw bacon," according to GQ.

Unfortunately, thanks to a very un-erotic full-frontal scene, the MPAA slapped the film with an NC-17, a rare label that effectively works as a muzzle, given that most theaters don't carry films with that rating. That concerns Fassbender, he says, because it's "a serious film that deserves to be treated as such." He also finds the whole controversy a bit silly.

"Half of us have a penis and the other half have probably seen one, and so why should it be more normal to, like, chop people's heads off and shoot people? Does that mean that that's more acceptable or closer to us as human beings?"

Check out a behind-the-scenes interview with Fassbender for GQ, AFTER THE JUMP…

Previous Post: « Gay Couple Talks About Their 6 Decades of Commitment and Love: VIDEO
Next Post: Iowa Senator Mike Gronstal Says He’ll Continue to Oppose Those Who Want to Do Away with Marriage Equality »