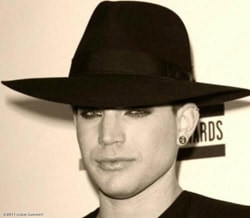 Realest of all is "Outlaws of Love" – a smoldering serenade about gay marriage. "I'd never considered marriage before," says Lambert, who's dating Sauli Koskinen, a Finnish reality-TV personality. "But now that I am, I can't do it."

Adam Lambert is also set to discuss his evolving look on a future episode of All On the Line with Joe Zee on The Sundance Channel.