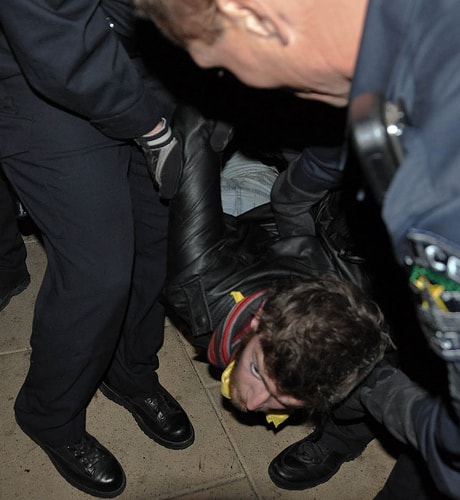 The bill would make the same-sex partners of federal employees eligible for federal health benefits, long-term care, Family and Medical Leave and federal retirement benefits. Gay federal employees and their partners would be subject to the same standards that apply to married federal workers, including anti-nepotism rules and financial disclosure requirements, according to Lieberman and Collins’s offices.

Hermain Cain says all those women are liars.

Dating from before Stonewall, the site was a place where stigma and inhibitions were left at the coat check. Even with gay marriage legal in New York, its dance floor is still held with mythic regard, a “gay utopia,” in the words of Andrew Kirtzman, the former television newsman who recently bought the club with two business partners, and has vowed to rebuild it.

Every time God closes a door, He … oh, you know.

He was abused, and then he was silent. Now, Penn State has inspired him to speak out:

… Because this is not about a problem at some other institution; it’s a reflection of a universal human tendency to look out for oneself, and to preserve hierarchical institutions about which one cares and upon which one is dependent. It’s also a reflection of the nearly boundless capacity to ignore inconvenient facts and to make excuses for those within our own circle. Think about the Catholic Church. Predators flourished in parishes for years, not simply (and probably not even primarily) because higher-ups worried about financial exposure. They flourished because many otherwise good people could not bring themselves to believe or to act upon information that their priest was a rapist. 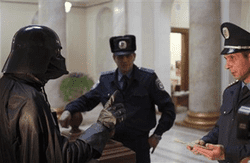 Darth Vader vs. the Ukrainian bureaucrats.

O’Keefe has had a series of falling outs with close associates involved in his stings — and some of them have grumbled that he lacks the undercover journalism chops and leadership ability to turn Project Veritas into a force.

“What people around him learn about O’Keefe is that he doesn’t plan or research anything he does,” said a former associate who devised and implemented the NPR sting, which led to the resignation of the taxpayer-supported radio network’s president.

AFTER THE JUMP: At The Amaz!ng Meeting in Las Vegas, Sadie Crabtree explains how to make crazy people rational.