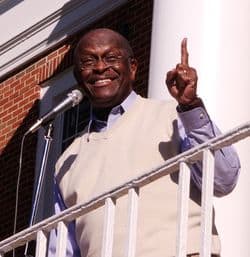 In Florida, engaged in intense damage control after his ridiculous Libya gaffe earlier this week, Herman Cain … did himself some damage.

Yesterday, when asked about Monday's gaffe — in which Cain seemed to struggle to remember even the most basic details of NATO's recent intervention in Libyan — Hermain Cain blamed his previous confusion on reporters. He said:

The question was too broad. And so I paused, and what they didn't show was, I asked the reporter to be more specific. Well, he didn't get more speicifc. His question was: "Do you agree or disagree with President Obama on Libya?" What part? Do I agree with the part where we intervene with rockets and missiles? Do I agree with siding with the opposition? Do I aree with saying that Gaddafi should do? Do I agree that they now have a country where you've got Taliban and Al Qaeda is gonna be part of the government? Do I agree with not knowing what they government is gonna do? Which part was he asking me about?

The problem with this answer is that, no, there's no sign that the Taliban have made any inroads into Libya. Yes, both the Taliban and the Muslim population of Libya tend to be Sunnis. And yes, Libya's Islamists are likely too extreme to make any secular-minded person happy. But Taliban? No sign of them. Even FOX News agrees:

There is no evidence the Taliban are returning to power in Libya, a continent away.